In summary, for patients who were treated with rocuronium:

Study Population: 4151 adults and children of any age who underwent rapid sequence intubation, electively or emergently, across 50 studies.

Narrative: Rapid sequence intubation (RSI), placing a tube into the trachea facilitated by rapid sedation and paralysis to improve ventilation and oxygenation, is a common procedure in emergent, critical care, and operating room settings. There is great interest in drugs that improve the process. The two most commonly used paralytic agents in the emergency department are succinylcholine (depolarizing) and rocuronium (non-depolarizing). Traditionally succinylcholine has been the preferred muscle relaxant for RSI because of its rapid onset of 40 to 60 seconds and a short duration of action lasting 6 to 10 minutes. However, succinylcholine’s depolarizing action may lead to hyperkalemia, possibly inducing fatal cardiac arrhythmia. As a result, it is contraindicated in patients with known hyperkalemia, severe burns (beyond 48 hours), major crush injuries (beyond 48 hours), denervation syndromes, and muscular dystrophy.1 Rocuronium however, is a steroid-based non-depolarizing muscle relaxant, which has been proposed for creating intubating conditions similar to those of succinylcholine. The duration of action is longer, lasting 37-72 minutes and has an antidote, while the only contraindication is allergy.1

The Cochrane review summarized here1 determines whether rocuronium creates intubating conditions comparable to those of succinylcholine, by comparing the Goldberg scale (Table 1). This scale allocates a score (1 through 4) for each of the following item: ease of intubation, vocal cord movement, and patient response to intubation. This scale gives a total point value of 12, in which three represents excellent, four to six represents good, seven to nine represents poor, and 10 to 12 represents inadequate intubating condition. 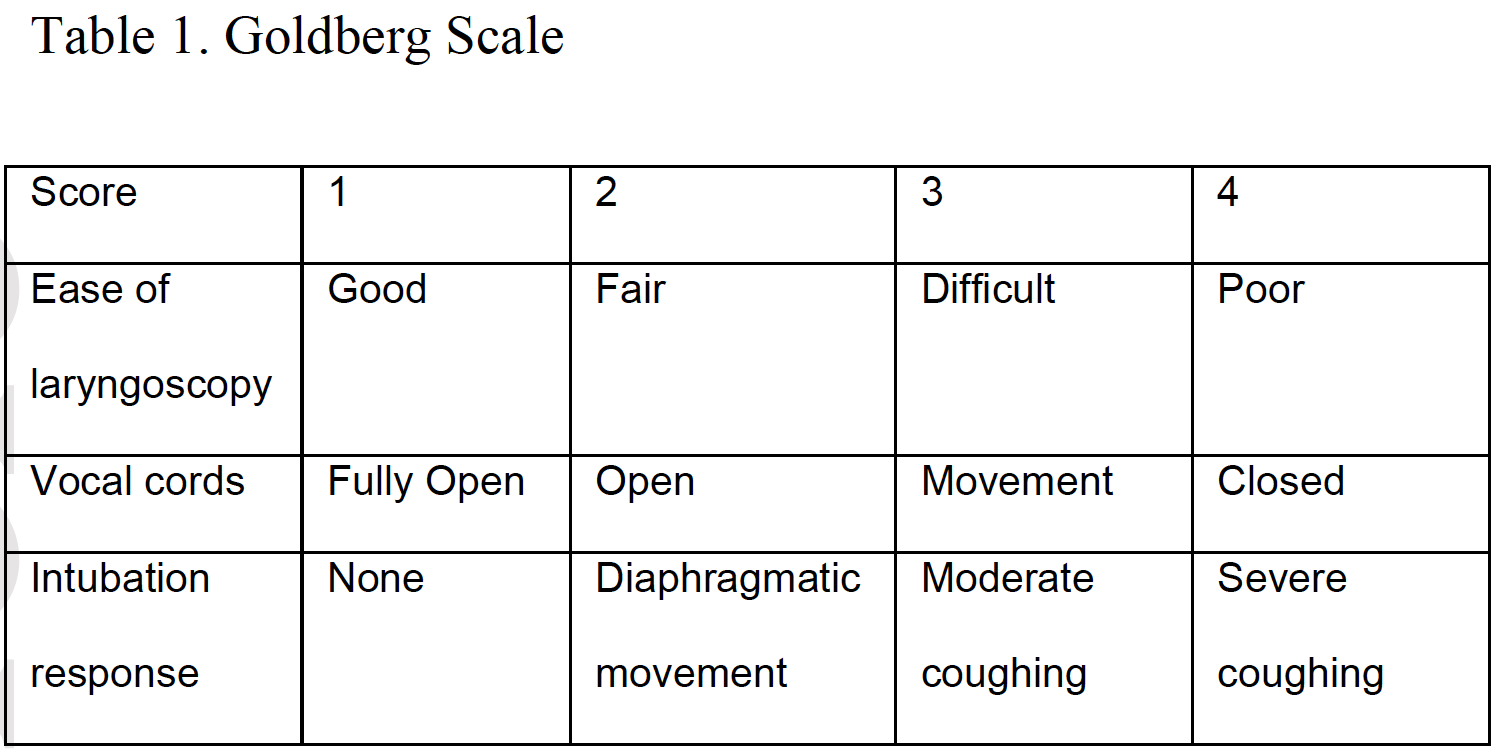 The Cochrane review1 included randomized controlled trials (RCT) and controlled clinical trials (CCT) meeting the following inclusion criteria: 1) Score of intubation is reported as the main outcome. 2) Compared succinylcholine with rocuronium. 3) The dose of rocuronium was at least 0.6 mg/kg (0.6-1.2 mg/kg) and the dose of succinylcholine was at least 1 mg/kg. The sedative agents used for induction were thiopental, benzodiazipines, propofol, etomidate, or ketamine. It is important to note that the majority of included trials were conducted in non-emergent settings and rocuronium was used at low doses (0.6-0.7 mg/kg) in most trials.

Overall, the meta-analysis revealed that succinylcholine was superior to rocuronium for achieving excellent intubating conditions (Relative Risk [RR]: 0.86, 95% Confidence Interval [CI], 0.81 - 0.92; Absolute Risk Reduction [ARR] 12%; Number-Needed-To-Treat [NNT]: 8), and for clinically acceptable conditions (RR: 0.97, 95% CI, 0.95 - 0.99; ARR: 5%; NNT 19). Heterogeneity among trials for both endpoints was very high. However, when dosing of the medication was analyzed, succinylcholine was superior only to low dose (0.6 - 0.7 mg/kg) rocuronium and there was no difference in outcome between the groups when the recommended higher dose (0.9 - 1.0 mg/kg) of rocuronium was used. Since the recommended dose for rocuronium in RSA is higher than the dose used in the Cochrane’s main analysis,2,3 we did not include the efficacy endpoints for the low-dose rocuronium in the summary table.

Caveats: The safety of rapid sequence intubation is sought by providers who have long dealt with periprocedural complications and general instability with this high-stakes procedure. It is important to note, that the Cochrane review included only 5 studies (1,073 participants) occurring in the emergency setting. Therefore, the findings of the systematic review might not be applicable to emergency department. Additionally, measuring the endpoint of “excellent” and “clinically acceptable” intubating conditions has an uncertain clinical relevance to emergency physicians due to its subjectivity and potential for bias. A more important outcome is first-pass success along with peri-intubation adverse events, such as hypoxia, hypotension, esophageal intubation, etc.

The vast majority of studies in the Cochrane review compared succinylcholine with low-dose rocuronium (0.6-0.7 mg/kg). When using rocuronium, quality intubating conditions are achieved with higher doses (>0.9 mg/kg). Whereas, lower doses may take a longer onset of action resulting in the possibility of delayed/failed endotracheal tube placement or compromising the quality.

Since the publication of this Cochrane review in 2015, another study by April et al.4 based on registry data, has been published in 2018. This study included 4,275 intubations from the National Emergency Airway Registry (NEAR); comparing first-pass success rates and adverse events between succinylcholine and rocuronium. This analysis showed no difference in first-pass success (87.0% versus 87.5%) or adverse events (14.7% versus 14.8%) between succinylcholine and rocuronium groups. Moreover, the mean dose of succinylcholine was 1.8 mg/kg, whereas the mean dose of rocuronium was 1.2 mg/kg. These findings confirm the results in the subgroup analysis of the Cochrane review that compared succinylcholine with high-dose rocuronium.

Preferring one agent based on time of onset and duration of action is common and debated. Rocuronium is longer acting and has a reversal agent. Many ED physicians have more experience using succinylcholine, which is shorter acting, making a reversal agent less often helpful. Some clinicians opt for rocuronium to avoid adverse reactions (e.g. hyperkalemia), and to have the option of reversal on demand. Others recommend succinylcholine, preferring shorter paralysis.

Notably, heterogeneity in the primary and secondary outcome analyses was very high. This suggests these results should be interpreted with caution.

In summary, we believe that comparing succinylcholine with suboptimal, low doses of rocuronium is inappropriate. We have based our finding of no difference, and our color assignment (Yellow—further research needed) on the results of the proper comparison. We look forward to clinical trials comparing high dose rocuronium (>0.9 mg/kg) with succinylcholine for RSI in the emergency department setting, while focusing on relevant outcomes of first-pass success rates and adverse outcomes.