Narrative: This was a meta-analysis including 16 studies (n=2379) evaluating the operating characteristics of emergency physician (EP) performed ultrasound for the diagnosis of DVT. The providers used color-flow duplex ultrasound in two studies, proximal venous ultrasound in 13 studies (not looking at the calf), and whole-leg venous ultrasound in one study. Reference standard was radiology department ultrasound, vascular lab, or angiography. Considering only high quality studies which met QUADAS-2 Criteria (11 out of 16 initially selected studies), the sensitivity and specificity improved to 97.6% and 96.8% respectively. 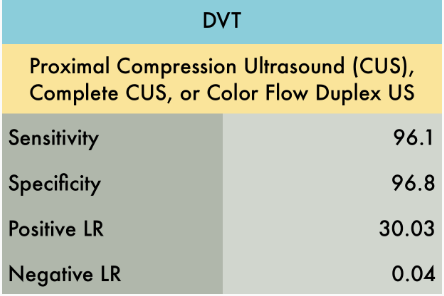