Narrative: Penetrating extremity trauma (PET) is a common cause of arterial injury in the United States.1 PET can result in amputation, wound infection, venous thromboembolism, need for surgical interventions such as fasciotomy, and death.2 The diagnosis of arterial injury in patients with PET has been the subject of debate with differing recommendations by professional society and major trauma guidelines (Table 1).3, 4

Caveats: There are some limitations of the systematic review and metaanalysis. While all studies were prospective and the majority at low risk of bias, a considerable degree of heterogeneity existed among studies with regard to physical examination findings for arterial injury. The authors attributed this heterogeneity to the varying definition of hard and soft signs of arterial injury used across the included trials that originated from discrepancies in major trauma guidelines (Table 1).

Table 1. Definition of hard and soft signs in trauma guidelines 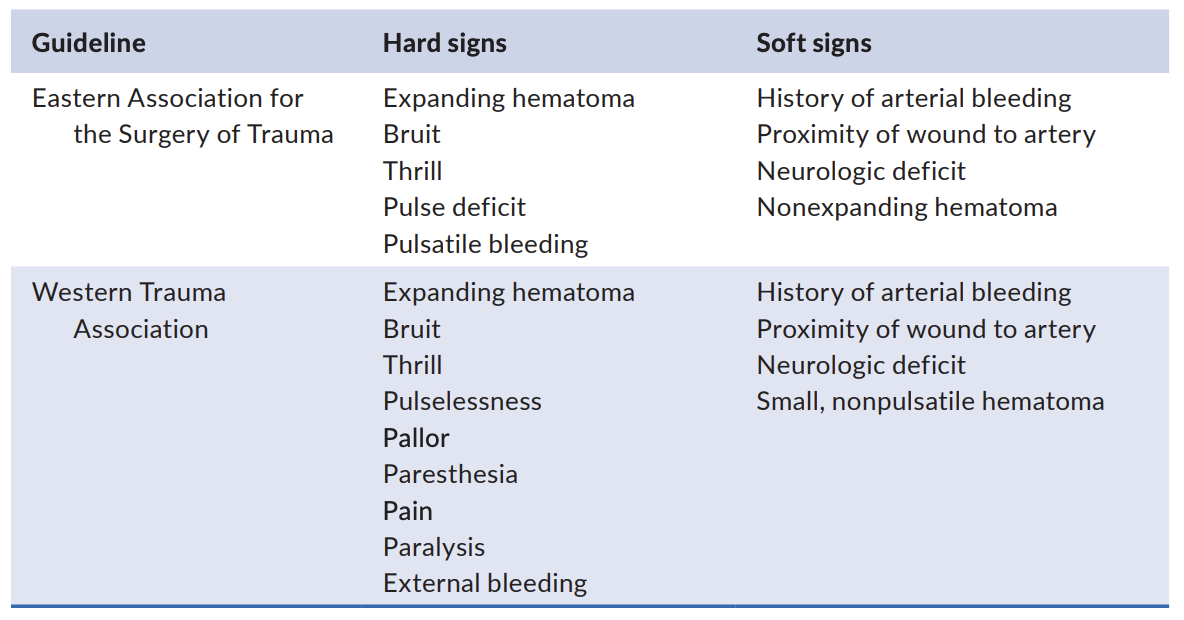 Another limitation of the analysis is that not all patients received the reference standard diagnostic study. In almost all of the included trials, low-risk patients were observed for 24 h and did not undergo any of the predetermined reference tests: CT angiography, catheter angiography, or surgical exploration. The probability of clinically significant arterial injury (requiring intervention) in this population is likely to be low but cannot be accurately reported. A significant portion of these “low-risk” patients were then discharged and were lost to follow-up. This, therefore, creates risk of partial and differential verification bias.

Due to considerable heterogeneity, the systematic review did not report the posttest probability of arterial injury in patients with no hard signs of vascular injury. However, in patients with no hard or soft signs of vascular injury, a systematic review concluded that arterial injury can be ruled out if ABI is normal (≥0.9). This conclusion was drawn from two trials that included a group of PET patients without any hard or soft signs of arterial injury that underwent ABI testing. The review reports a pooled LR– of 0.01 for negative ABI in absence of soft or hard signs of vascular injury. The authors used the weighted prevalence of arterial injury in this subgroup of patients (16.3%) as an estimate of the pre-test probability and applied LR– of 0.01, arriving at a posttest arterial injury probability of 0% (95% CI = 0% to 1%). Based on this calculation, they suggested that this subset of patients may not need further testing. One limitation of this recommendation is its applicability in patients with PETs when the trajectory of injury is in proximity to a major artery. In contrast to the guidelines,3, 4 these two studies did not classify trajectory of injury in proximity to a major artery as a soft sign. In patients with such injuries, therefore, the review recommends that clinicians use their clinical judgment to decide whether to discharge, observe, or obtain further testing.