In summary, for patients treated with early endovascular thrombectomy:

Not applicable (the rates of symptomatic intracerebral hemorrhage, parenchymal hematoma type 2, and mortality did not significantly differ between the endovascular thrombectomy group and the control group)

Not applicable (the rates of symptomatic intracerebral hemorrhage, parenchymal hematoma type 2, and mortality did not significantly differ between the endovascular thrombectomy group and the control group)

Narrative: Anterior circulation large-vessel occlusion (LVO) of the internal carotid or middle cerebral artery is one of the most devastating ischemic stroke subtypes. Prior to 2015, evidence supporting endovascular thrombectomy for acute ischemic stroke was limited.1, 2 This was due to multiple factors, including low recanalization rates with previous-generation thrombectomy devices, inadequate neuroimaging inclusion criteria (patients enrolled in trials lacked target LVO and/or had large preexisting core infarcts), and selection bias—patients considered most likely to benefit from thrombectomy underwent the procedure outside of clinical trials.1, 2 However, five randomized controlled trials3, 4, 5, 6, 7 published in 2015 established that endovascular thrombectomy significantly reduces disability in acute ischemic stroke when performed with stent retrievers in the setting of anterior circulation LVO and minimal core infarct burden. Four of these five trials were terminated early due to overwhelming treatment benefit, limiting analysis of secondary outcomes. A patient-level meta-analysis of all five trials was published in The Lancet in 2016.8 All subjects included in the meta-analysis had an anterior circulation LVO stroke. The median (interquartile range [IQR]) age was 68 (57–77) years with median (IQR) National Institutes of Health Stroke Scale (NIHSS) 17 (14–20) and Alberta Stroke Program Early CT Score (ASPECTS) 9(7–10). Median (IQR) time to recanalization of the occluded vessel with endovascular thrombectomy was 285 (210–362) minutes.

The aggregate clinical trial data strongly favor endovascular thrombectomy over medical management for anterior circulation LVO with a number needed to treat (NNT) of 2.6 for one additional patient to achieve improved functional outcome, defined as improvement by at least one level on the modified Rankin Scale (mRS) at 90 days (adjusted odds ratio [aOR] = 2.49, 95% confidence interval [CI] = 1.79–3.53; please refer to Figure 1A for the mRS). Additionally, for every five patients treated with endovascular thrombectomy, one additional patient achieved functional independence (mRS 0–2) at 90 days (46%vs. 26.5%, absolute risk difference = 19.5%, aOR = 2.71, 95% CI = 2.07–3.55; Figures 1B and 1C). These findings were consistent across all subgroups (age, sex, NIHSS, ASPECTS, site of intracranial occlusion, intravenous tPA eligible or ineligible, and time from onset to randomization), suggesting that the benefit of thrombectomy is generalizable to a broad spectrum of patients with anterior circulation LVO.8 Importantly, this strengthens the evidence that endovascular therapy should not be withheld on the basis of factors such as age or tPA eligibility.8 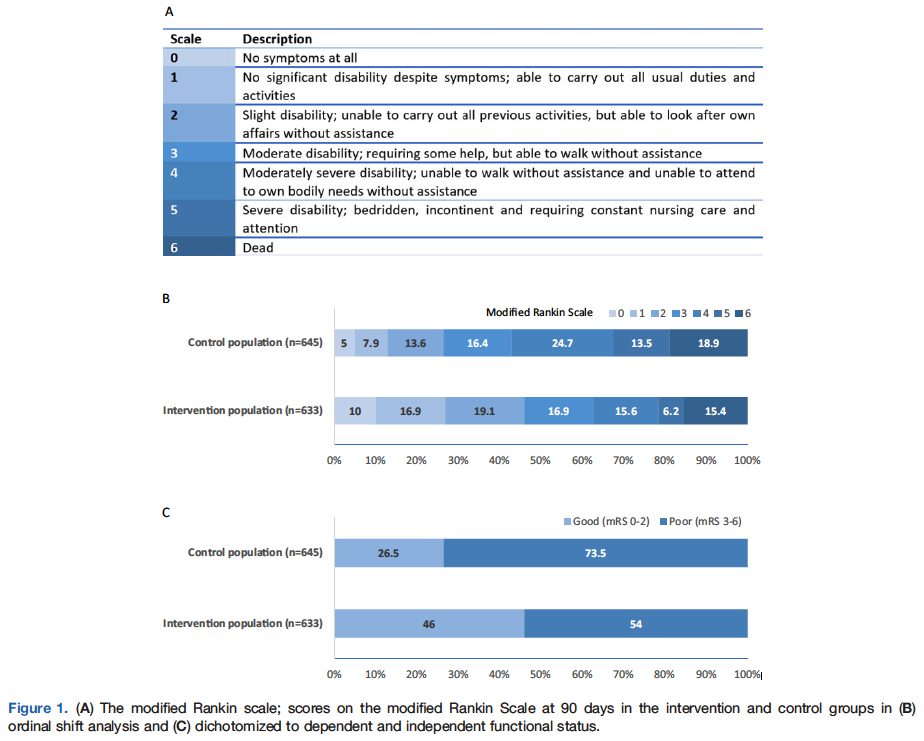 Caveats: All five clinical trials were conducted at experienced, high-volume tertiary stroke centers. Therefore, these results may not be replicated at clinical sites without similar levels of stroke and neurointerventional expertise. In addition, these results cannot be extrapolated to all stroke patients. The benefit of endovascular treatment for stroke patients with large infarcts (representing irreversible ischemic injury), but substantial viable ischemic tissue remains to be determined. Additional stroke subgroups for which thrombectomy is yet to be definitively studied include posterior circulation stroke, distal vessel occlusion, patients with minor deficits, and those with premorbid disability. Notably, two recent clinical trials have demonstrated a benefit for delayed thrombectomy (6–24 hours from stroke onset) in patients selected using more stringent clinical and advanced neuroimaging criteria.9, 10 These highly selected patients represent a more homogenous stroke population distinct from the trials in the meta-analysis of Goyal et al.8

There was no significant difference in symptomatic intracerebral hemorrhage (aOR = 1.07, 95% CI = 0.62–1.84), parenchymal hematoma type 2 (aOR = 1.04, 95% CI = 0.63–1.72), and mortality (aOR = 0.73, 95% CI = 0.47–1.13) between the thrombectomy group and the medical group.8 One plausible explanation for this finding is that, despite the associated procedural risk, thrombectomy patients ultimately have smaller ischemic stroke volumes than nonthrombectomy patients leading to lower rates of postprocedural spontaneous hemorrhagic transformation.6

The mRS, which is commonly used in stroke clinical trials, is a discrete functional outcome score with high inter-rater reliability and little room for subjective interpretation.11 Although participants and their families were not blinded to the treatment arm, to minimize bias, each individual trial employed a PROBE (prospective randomized open blinded endpoint) design, in which all outcome assessors remain blinded. Additionally, all outcomes were adjudicated by study personnel certified in scoring the mRS.

In acute stroke trials, functional outcome can be analyzed by binary analysis (dichotomized ordinal outcome scales, i.e., “good” vs. “poor”) or by shift analysis (which evaluate outcomes over the entire scale range). One limitation of the mRS shift analysis employed in these trials is that it values each mRS strata equally. However, studies have shown, for example, that most people attach a higher value to an improvement from mRS 3 to 2 than to an improvement from mRS 1 to 0 (Figure 1A). This was accounted for in the DAWN trial,9 which employed a weighted shift analysis as one of the co-primary endpoints. Despite this limitation, the shift analysis has become convention in stroke trials because it provides information across a wider range of outcomes and, hence, is considerably more clinically relevant than traditional dichotomized outcomes.

In conclusion, we assigned a color recommendation of green (benefit > harm) to this intervention because of evidence of patient-centered benefit for early endovascular thrombectomy in anterior circulation LVO stroke and absence of significant harm. This benefit was evident across a wide range of ages and was present irrespective of tPA eligibility.