In summary, for patients who received aspirin:

1 in 250 suffered a major bleeding event

Zheng SL, Roddick AJ. Association of Aspirin Use for Primary Prevention With Cardiovascular Events and Bleeding Events: A Systematic Review and Meta-analysis. JAMA. 2019;321:277–87.

Narrative: Cardiovascular disease (CVD) is a major cause of death worldwide. Aspirin inhibits platelet aggregation which reduces clot formation. Thus, aspirin can help prevent cardiovascular problems caused by blood clots, but it can also increase risk of bleeding. For persons with known CVD, the beneficial effect of aspirin use for preventing cardiovascular events outweighs the harmful side effects (e.g. bleeding).1 The efficacy of aspirin in preventing cardiovascular events in patients without previously known CVD (primary prevention), has been unclear. This evidence-based summary examines the benefits and harms of aspirin in patients without known CVD. For this purpose, we summarize the 2015 US PreventiveServices Task Force report2 and two recent systematic reviews of aspirin for primary prevention.3, 4 The USPSTF report, published in 2016, was the definitive systematic review until three trials were published after its release. The ARRIVE,5 ASCEND,6 and ASPREE7 clinical trials together included over 47,000 new subjects. Two updated systematic reviews by Mahmoud et al.3 and Zheng et al.4 were published in 2019 and both include all the most recent trials. The summary table above of benefits and harms are derived from the two most recent meta-analyses by Mahmoud et al.3 and Zheng et al.4 because the USPTF report does not include the most recent trials. For the most part, the reported number-needed-to-treat (NNT) values and number-needed-to-harm (NNH) values were similar between the two reviews (Table 2). When the NNT and NNH values were different, to be conservative, we reported the higher NNT value and the lower NNH value. 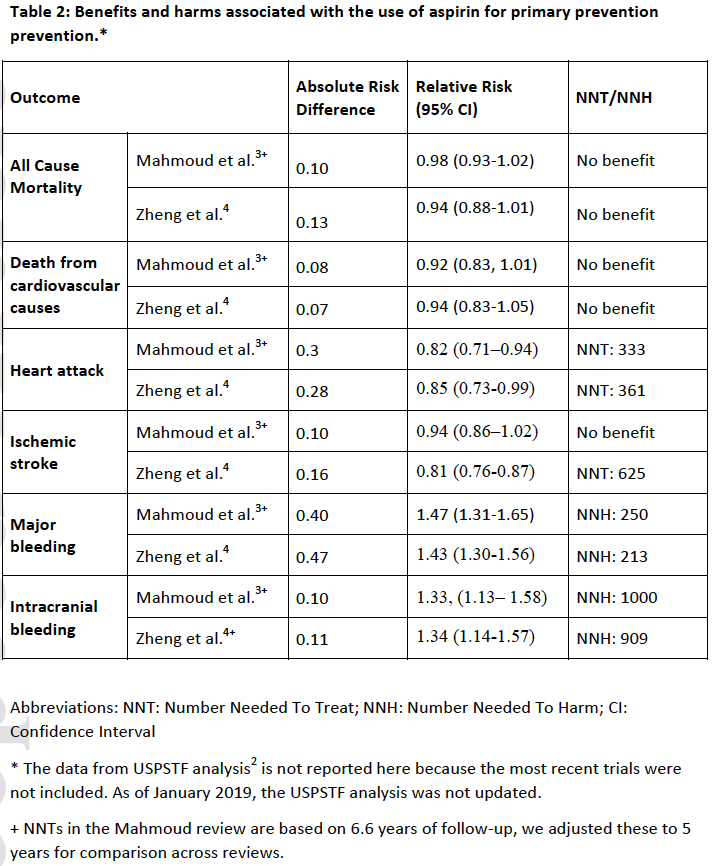 Mortality:
For the outcome of greatest interest, mortality, the older USPSTF analysis found a statistically significant overall benefit for aspirin at all doses, but no statistically significant benefit for aspirin at low doses (100 mg or less). The two updated reviews by Mahmoud et al.3 and Zheng et al.4 found no benefit in mortality regardless of the dose of aspirin (Table 2).

Stroke:
The older USPTF analysis and the newer review by Mahmoud et al. did not find that aspirin prevented ischemic stroke, combined fatal and nonfatal.2, 3 Only the systematic review by Zheng et al.4 showed a small reduction in risk of ischemic stroke in patients allocated to the aspirin group, with an NNT value of 625 (Table 2).

Subgroups:
Harms outweighed benefits in all three reviews when analyzing all patients, with no mortality reduction. The USPSTF,2 however, projected one subgroup that may have benefits outweighing harms. USPSTF looked at different age groups and divided each age group into different CVD risk groups using the AHA calculator to predict the 10-year risk of a cardiovascular event. In a computer model by Health Partners Institute,8 50-59 year old patients with >10% risk over 10 years saw a projected benefit from reduction in nonfatal heart attacks that outpaced the increase risk of major bleeding. No other subgroup realized anet overall benefit.

Dosing:
Optimal dosing of aspirin is unknown and some data suggest weight-based dosing.9 In the USPSTF analysis, low-dose aspirin (100 mg or less) was not associated with lower mortality but higher doses were, while the opposite association was true for nonfatal stroke. Aspirin dosing was not addressed in the Mahmoud et al.3 and Zheng et al.4 reviews. The conflicting results for dose finding in the older report and lack of newer analysis in the updated reviews makes dosing risk-benefit analysis unclear at this time.

Caveats: The older USPSTF report has limitations. The finding of overall benefit for 50-59 year old patients is a computer projection based upon a statistical model.10 The model uses data from subgroups across several trials, and applies the benefits found with aspirin to a hypothetical person - in this case, a 50-59 year-old American male - with a baseline cardiovascular risk estimated using the AHA risk calculator. Unfortunately, that calculator substantially overestimates risk (by anywhere from 20-100% or more).11,s 12, 13 Given the razor-thin benefit margins found, any overestimate of baseline risk would convert the finding of overall benefit to a finding of overall harm. Moreover, the model is out of date as three new large randomized controlled trials have been published since its release.

There is debate across reviews about the definition of“primary prevention.” In the ETDRS study14 half of the patients had known CVD, and all patients in the POPADAD study15 and the AAA study16 had arterial disease. The USPSTF and older meta-analyses included these studies, Mahmoud et al.3 excluded them, and Zheng et al.4 included ETDRS only. These patients constitute less than 9000 subjects (5%) of the total patients analyzed. The varying inclusion of the three studies who enrolled patients with apparent CVD resulted in 96% overlap between the Mahmoud et al. review (157000 subjects) and Zheng et al. review (164000 subjects). The inclusion of some patients with CVD in the Zheng et al. study may explain why Zheng et al. found a statistically significant small stroke prevention benefit, while Mahmoud et al. did not (Table 2).

Regardless of these minor differences, both updated reviews found no consensus finding of benefits outweighing harms in patients regardless of CVD risk, contradicting the statistical model projection from the USPTF report that high-risk subgroups may benefit specifically. While overall benefit may be true in secondary prevention in high-risk patients, results from these primary prevention reviews are uniform in the benefits not outweighing the harms. In fact, the recent ASPREE trial found high-risk patients had increased harm compared to low-risk patients.7 The proportion of high-risk patients was highest among the newer studies (25-30%), and no statistically significant benefit was found in any outcome—only harms from mortality and bleeding.5, 6, 7

Further concern regarding the USPTF report reliance on the AHA calculator to project a subgroup benefit is that coronary events occurred at less than a third the predicted rate in the ASPREE trial,7 and less than half predicted in the ARRIVE,5and ASCEND6 trials. In practice, clinicians often apply the AHA calculator used in trials and estimate risk conservatively. If faulty calculators and conservative gestalt lead to overestimation of risk, and clinicians wrongly believe higher risk means greater benefit from aspirin, overall harm due to aspirin prescribing for primary prevention is probably widespread.

By the same token, overestimation means true ultra-high-risk patients (10-year risk of cardiovascular disease >30%) were potentially misdiagnosed as having pre-existing CVD and were not enrolled in primary prevention trials and may potentially benefit. Future studies should tackle this question.

Last but not least, patient preference is an important factor for making the decision regarding aspirin use for primary prevention of cardiovascular disease. Some patients may value avoiding nonfatal heart attacks or possibly avoiding ischemic strokes as being worth the increased risk of major bleeding.

We chose a Red color recommendation (No Benefit) because of consistent findings of harm outweighing benefit. We considered Black (Harmful) but recognize there may be subgroups studies that will identify patients who can benefit.